January 6 Rioter Stole Bottle of Bourbon From US Capitol
Article 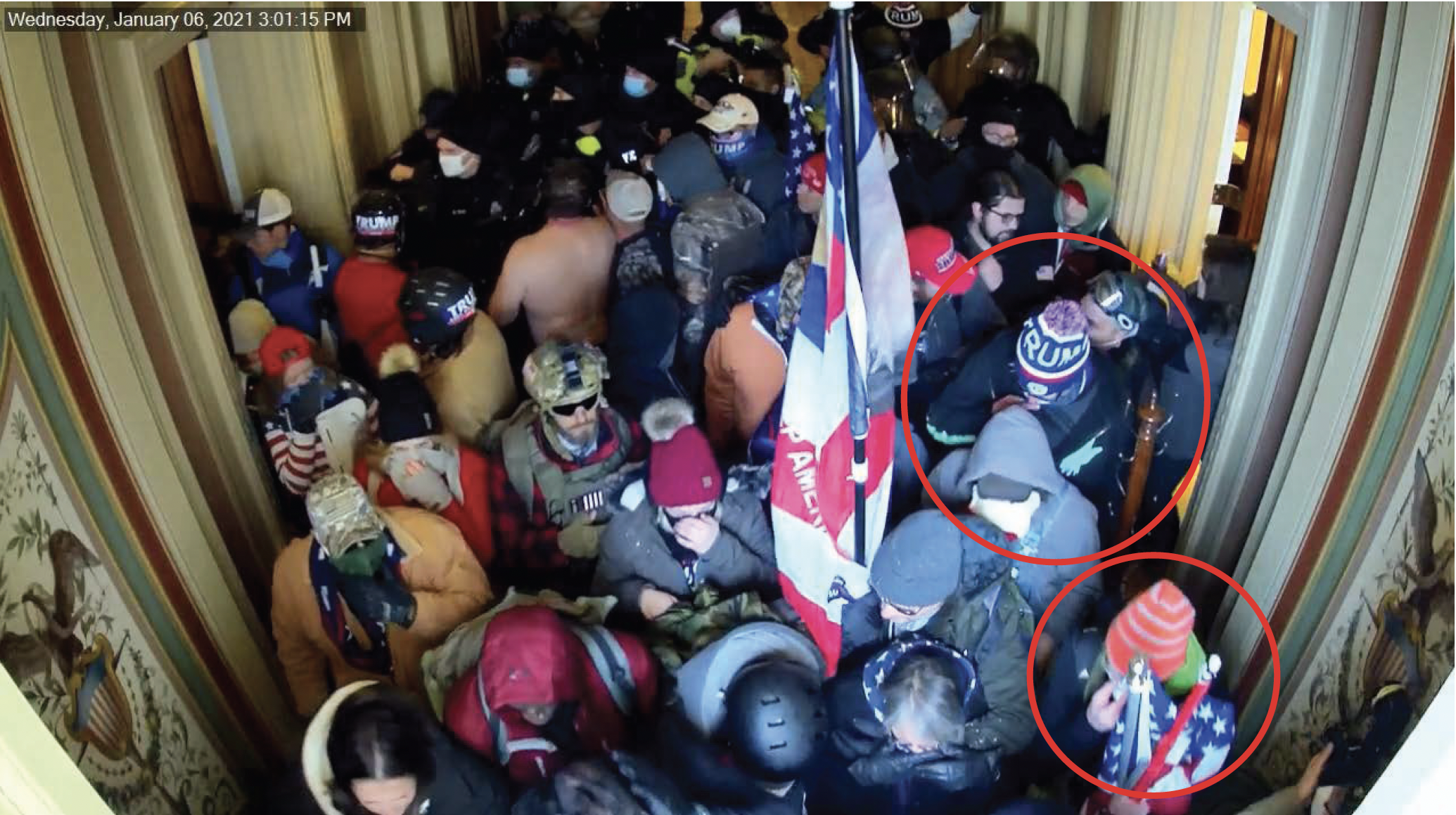 Robert Anthony Lyon (circled, wearing orange hat) pleaded guilty after he and his friend, Dustin Thompson (Circled, wearing Trump hat) were seen on security camera footage in the U.S. Capitol Building on Jan. 6. Thompson, who pled not guilty, is accused of stealing a bottle of bourbon and a coat rack from the Capitol. (Photo: United States District Court for the District of Columbia)

A man accused of stealing a bottle of bourbon during the assault on the U.S. Capitol Building pleaded guilty Monday to two counts.

Robert Anthony Lyon of Columbus, Ohio, appeared before U.S. District Judge Reggie B. Walton to plead guilty to one count each of theft of government property and disorderly and disruptive conduct in a restricted building or grounds. Both are Class “A” misdemeanors that carry a maximum sentence of one year in prison, but prosecutors said in plea paperwork he faced a likely recommended sentence of 0-6 months of prison.

Lyon’s friend and co-defendant, Dustin Thompson, pleaded not guilty to the charges against him. He’s currently scheduled to begin trial on April 11. Lyon was scheduled to be sentenced on June 3.

Lyon and Thompson were approached by U.S. Capitol Police at about 6 p.m. Jan. 6 while sitting on the sidewalk at an intersection on the south side of the National Mall, according to a criminal complaint. The police approached the men because o their attire; Lyon had a Trump 2020 flag, and Thompson was wearing a Trump 2020 winter cap and a bulletproof vest. The men told the officers they were waiting for an Uber, but before they left to locate their Uber, Thompson picked up a coat rack, which the officers noticed appeared to have been taken from the Capitol. The officers then attempted to stop the men, at which point Thompson fled on foot, the USCP agents said.

Lyon gave the officers his driver’s license and Thompson’s name. When police searched his bag, they found marijuana, two pipes and an open bottle of bourbon.

Lyon told the officers he hadn’t entered the Capitol but had attended the rally. Lyon showed police his phone, which revealed calls made to Thompson and photos of the two together. Lyon told them he and Thompson had driven to Washington, D.C., together and took an Uber to Capitol Hill for the rally. After being questioned, Lyon was allowed to leave.

On Jan. 11, Lyon was interviewed at his residence in Columbus, Ohio, by FBI agents. Lyon told the agents it had been Thompson’s idea to travel to D.C. and said that while the two were at the rally, Thompson walked away and returned later on, holding the coat rack. Lyon agreed to show the agents messages on his phone and download his phone’s camera images.

Agents found Lyon had texted Thompson, “We need to get the fuck out with this trophy.” Officers said Lyon became “visibly nervous” when they asked about the text and again denied being in the Capitol but said he believed Thompson had entered the Capitol since he had the coat rack when he returned.

Lyon’s phone included a photo of Thompson posing with an American flag and the coat rack, along with a video taken in a ransacked office, showing Thompson, who yelled “Wooooo! ‘Merica Hey! This is our house!”

Agents were later able to locate Thompson on security camera footage from the Capitol. Footage showed him entering and then departing an office, holding a bottle of bourbon upon exiting.

About four minutes after Thompson left the Capitol building, security footage showed him return with Lyon. Thompson returned to the same office with Lyon and left with the coat rack. Lyon was easily identified in the footage because he was wearing the same orange ski cap he had been wearing when the officers pulled him over.

Both men were indicted in February on multiple counts, including theft of government property and a felony count of obstruction of an official proceeding.