Forrie J Smith and Kina Pickett are Oak and Eden’s newest faces for their Anthro Series.

Cowboys and travelers deeply inspire the Anthro Series by Oak and Eden, and Smith and Picket are the perfect candidates for that. Taking both of their unique stories and backgrounds to create distinct and individualized bourbon for both men. 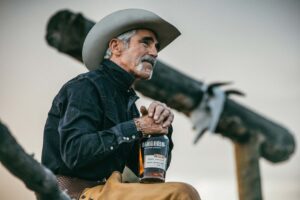 Image via Oak and Eden

Smith’s cold brew coffee infused bourbon is a nod towards his life in the rodeo, where he would enjoy a strong cup of coffee before jumping on his horse for the day. After spending 52 years in the rodeo, he started pursuing a career as a stuntman in Hollywood. He eventually landed a series regular role on Paramount Network’s hit TV show, Yellowstone.

“We collaborated with Forrie to create a barrel strength bourbon finished with an American Oak spire steeped in cold brew coffee. It is a remarkable, bold, rich bourbon that is truly one-of-a-kind.” So says Oak and Eden of the collaboration.

Smith’s bourbon clocks in at 116 proof and aged in American Oak charred barrels. Drinkers should expect the perfect hint of cold brew coffee infused in each sip. Suggested retail is $84.

“Forrie is the embodiment of a character that has stood the test of time.” Oak and Eden 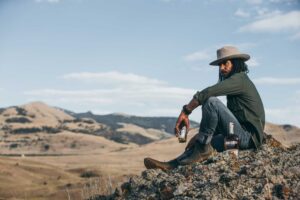 Image via Oak and Eden

One of the world’s first Black professional Big Mountain skiers, and eventually being named among the top ten skiers in the nation, Pickett was a natural choice for a whiskey collaboration for the company.

According to Oak and Eden’s website, “Kina’s love for whiskey goes back to many memories with his brother and dear friends both on the road and at home, strengthened by the camaraderie of stories around the campfire.”

Using Maple Syrup was the natural choice to use in his whiskey, as it comes straight from his background growing up in Vermont. Although, according to Kina, To this day, his mother’s parting words on the phone are, “How are you on maple syrup?” the area he lived in would have a consistent smell of burnt sugar.

Infused with Maple syrup, Pickett’s bourbon sits at a nice 90 proof and aged in charred American oak barrels. It is available for purchase on the Oak and Eden site, with a suggested retail of $69.

“All you have is your stories; the weirder, the wilder, the better.” –Kina Pickett

Both bourbons are available for purchase through the Oak and Eden website.

Here at Whiskey Raiders, we do more than write about current events in Whiskey. We review every type of whiskey under the sun and aggregate the scores and opinions of other great voices in the world of whiskey. Check out our Review Archive for reviews and thoughts from our in-house critic. If you’re interested in getting a shot of whiskey in your morning email, sign up for our Daily Dram Gram!