The Man Behind the Name: A Look at Pappy Van Winkle’s Legacy in Bourbon 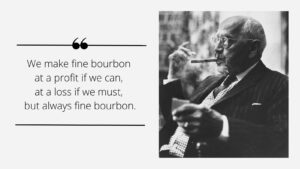 The bourbon industry is a vast market that has brought many industry superstars. One of the most famous names in bourbon is Pappy Van Winkle. But who was the man behind the name?

The Van Winkle family has been making bourbon for four generations and is one of the most iconic names in the industry. Pappy Van Winkle’s legacy is one of quality and consistency, which is why his bourbons are still some of the most sought-after spirits today.

Julian P. “Pappy” Van Winkle Sr.’s career didn’t begin in whiskey. First, he was a traveling sales representative for W.L. Weller and Sons, a wholesale business in Louisville, riding about the state in a horse-driven carriage.

Pappy and his companion, Alex Farnsley, acquired the wholesale house after several years. They subsequently purchased the A. Ph. Stitzel Distillery, which produced bourbon for Weller, merging the two firms.

The most prominent brands they owned are still popular today, including Weller, Old Fitzgerald, Rebel Yell and Cabin Still. In 1935, at age 61, Pappy Stitzel-Weller launched its new distillery in South Louisville. Van Winkle had a great deal of input on the operation.

His son, Julian Jr., took over operations after Van Winkle’s death at 91. Julian Jr. was compelled by stockholders to sell the distillery in 1972. All of the brands were either sold with the distillery or given to other distilleries as part of the deal.

After the sale, Julian Jr. brought back a pre-prohibition label that was the only one in which the Van Winkles retained control, known as Old Rip Van Winkle. Julian III, the eldest son of Julian, Jr., succeeded his father in 1981 when Julian Jr. died. Julian III has continued the Van Winkle family’s tradition of selling bourbon.

The family legacy didn’t end there. Preston, the son of Julian III, became a partner with the company in 2001, and the Van Winkles plan to continue that legacy for future descendants.

In 2002, the Van Winkles joined forces with the Buffalo Trace Distillery in Frankfort, Kentucky, in a co-venture. All of Van Winkle’s whiskey production now happens at Buffalo Trace, under the family’s same exacting standards, to produce the same highly sought-after product they’ve always produced.

Today, Pappy seems as popular as ever, even finding itself in the center of binge-worthy documentaries on streaming services like Netflix, which goes to show how desirable great bourbon is.

Consumers have a challenge being able to find, let alone purchase a bottle, as it’s virtually impossible to find one under a thousand dollars. However, it will pop up as a prize for raffles, auctions or lotteries from time to time.

So, the next time you’re out and about and spot a dusty bottle of Pappy Van Winkle on the shelf, don’t be fooled by its age – it may just be getting started. And if you can get your hands on some (legally, of course), consider yourself one of the lucky few who have been able to enjoy a dram.