Scotch VS. Bourbon – What’s the Difference?

Scotch versus bourbon lovers is truly the feud for the ages. However, many people don’t know the answer and, at this point, are too afraid to ask, which frankly is understandable. 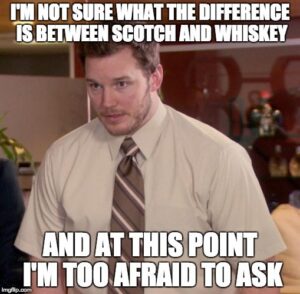 There is no difference between scotch and bourbon (or any other kind of whiskey) from a nutritional standpoint. However, there is a substantial difference in the flavor of the two, and strict regulations are required to be met to have either dram be considered a scotch or bourbon.

In terms of flavor, there is a distinct flavor between the two. For that matter, bourbon (and most other whiskeys) will tend to have sweeter qualities due to being made primarily of corn. Typically, drinkers can expect many dessert-like attributes, such as caramel, praline, and caramel.

Scotch, on the other hand, is going to be smokey and peaty. Those flavors are released by the peat fires used to dry malted barley. So, if your scotch smells like a bonfire when you first pull the cork out, then you’ve got a good scotch on your hands.

Another, and arguably the most significant difference, between scotch and bourbon are the laws revolving around the location where the whisk[e]y is distilled.

For bourbon to be considered bourbon, it has to be made on US soil. In fact, in 1964, Congress declared bourbon “America’s Native Spirit.”

That doesn’t mean there aren’t loopholes to this rule. Technically, bourbon only needs to be aged in the US for two years to be legally considered bourbon, which is why someone may come across this “Welsh Bourbon”.

Scotch can only be considered scotch by law if it is distilled and matured in Scotland, in oak casks for at least three years, and bottled at a minimum alcoholic strength of 40% abv.

Lastly, you can safely use an e when writing whiskey about bourbon. Traditionally, Scotch whisky is spelled without the e.