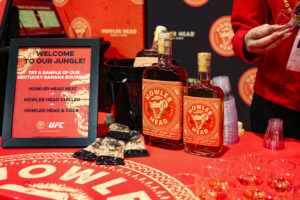 UFC President and Howler Head Banana Bourbon Co-founder Dana White this week announced the expansion of the popular flavored whiskey brand into Canada and the U.K.

Howler Head has seen a lot of success since its launch in 2020. It was one of the fastest-growing major American whiskies (flavored or unflavored) in California, Florida, Michigan and New York, according to a Nielsen study completed on Feb. 26.

The banana bourbon is the Official Flavored Whiskey Partner of UFC. This expansion into Canadian and UK markets means that the whiskey will have access to the massive UFC fanbase and market in Quebec, Ontario and British Columbia.

“Howler Head is the best whiskey I’ve ever had,” UFC President Dana White said in a news release. “As one of its co-founders, it’s amazing to see our badass brand quickly become one of the fastest-selling whiskies in the United States, while also perfectly aligning with UFC’s global fanbase. Our fans outside of the U.S. have been waiting for Howler Head to become available and our first expansions to Canada and the UK have been amazing. With UFC’s global fanbase of nearly 700 million in more than 170 countries, this is just the beginning. There is nothing better than watching our fights with Howler Head Bourbon and we want everyone to be able to have this experience.”

Howler Head is the original banana-flavored Kentucky straight bourbon whiskey made by Master Distiller Jacob Call at Green River Distilling Co. with proprietary yeast, grains and mineral-rich water filtered through Kentucky limestone. The whiskey is distilled in a 100-year-old Vendome all-copper column still. The resulting Bourbon is then aged two years in American white oak barrels with a #4 “alligator” char in traditional wood rick houses. Following the aging, the bourbon is blended with natural banana flavor and bottled at 80 proof.