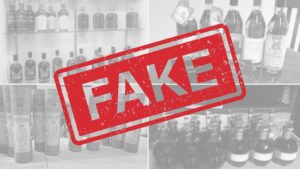 As long as there is a market for high-priced whiskey, scammers will continue to find ways to exploit it. There are even social media accounts dedicated to exposing these scam sites. But don’t worry – there are tried and true ways to be able to tell when the whiskey is the real deal or fake.

A major red flag to look out for are people selling whiskey on social media websites like Twitter and Facebook. If you’re still unsure, look at the comment section; is it restricted or removed altogether? It’s best to move along.

Another rule of thumb is to never make a purchase over private messaging. If you’re in a group on Facebook, for example, all of the dealings should go on in the main page thread. This is so you have witnesses able to back you up over the deal goes sideways. Unfortunately, this will mean the competition will be stiff for the bottle you want.

If you find yourself unable to resist inquiring about a bottle, and there is any rushing or pressure from the seller, it’s a good idea to cut your losses. If a seller truly has the desirable whiskey they say they have, there is no need to pressure the buyer into purchasing. Let’s face it, an authentic bottle of Blanton’s sells itself.

Any specials or deals that are being offered are a sure-fire way to know that it’s a scam. A quick Google search will be able to tell you how much a bottle is worth, and it’s important to use that as a guide for how much you can expect to spend on a specific bottle. 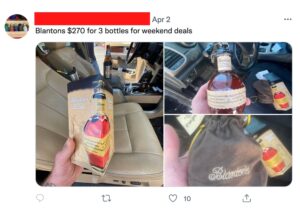 A scam account selling three bottles of Blanton’s for $270. With Blanton’s retailing for over $100 per bottle and selling for far more than that from resellers, this deal would be way too good to be true.

If You Have Any Doubt, There’s No Doubt What You Need to Do

If the individual you are talking to makes you question whether or not they are the real deal, they probably aren’t. Don’t be afraid to ask questions about the bottle and where it came from. If the seller begins to get hostile or frustrated, you know it’s time to end the conversation.

In the meantime, remember to always do your research before buying any expensive liquor online, and when it comes to buying expensive whiskey online, if it sounds too good to be true, it is.