How a Team of 'Misfits' Built Wolf Spirit, Sponsor of PFL
American

‘We are the Underdogs’: How a Team of ‘Misfits’ Built the Spirits Company That’s Sponsoring the Professional Fighters League 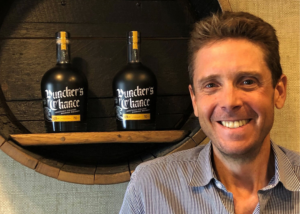 It’s been a few years since Umberto Luchini left Campari America, but his gut-sense marketing is still going strong. In 2017, he founded Wolf Spirit Distillery. Within three years, he had created multiple brands. With more on the horizon, it’s clear that this independent distillery knows how to play in every major category.

It’s this kind of spirit – the kind that doesn’t back down from a challenge, that embraces authenticity and is fueled by instinct – that has allowed Wolf Spirit to thrive in the competitive liquor market. With products like Tom of Finland® Organic Vodka, Blood x Sweat x Tears® Vodka and Bosscal Mezcal, they are quickly establishing themselves as one of Oregon’s most innovative and interesting distilleries.

“I went to the Pacific Northwest, which was always a region that attracted me for its entrepreneurial and craft feel,” Luchini said. “I went to Eugene, a big college town. We found this laundromat that was shutting down and we felt like it has all the basics for a distillery — access to water and fire protection and all the fire safety — and then we built it out from there.

“Honestly, I look back, and it literally started with a belief of just creating a brand and trying to see how far it would go. And now we actually have a portfolio.” 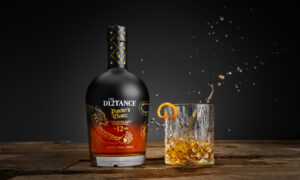 The ‘Misfits’ and Their ‘Puncher’s Chance’ at Success

The location isn’t the only thing that sets the brand apart from the rest. “It’s a senior team,” Luchini explained. “But we call ourselves ‘The Misfits’ because we all left the corporate world to pursue more independence and freedom to create our own stuff. I say stuff because originally it was really scrappy. Our distiller in Eugene was a tattoo artist. So we told him: ‘Listen, go online and figure out a way to make vodka.’ There was a lot of juice that we had to throw away, but it’s honestly it’s the journey, not the destination.”

His team and their start is part of Luchini’s inspiration for their newest bourbon, Puncher’s Chance: a bourbon that’s inspired by the underdog.

“Puncher’s Chance is a belief that you can win against the odds. It’s the feeling that I had when I moved to America [from Italy],” Luchini said. “I don’t want to get political, but despite all the bashing about America, the reality is it is still the place where 99% of the people want to go to make it in their life. It is still where you feel you have a chance in life.

“So all those experiences really pointed to the entrepreneurial spirit that is not just in Wolf Spirits, but it’s in America. As an immigrant, that’s what I bought about this country. So the first vodka, ‘Blood Sweat Tears,’ was named because of the journey that me and two other guys took along the way to create and get the distillery up and running. It took a year and a half of a lot of learning.”

That journey led him right to MMA. Umberto has always been inspired by professional fighting since his childhood, and when he looked at current trends, sponsoring fighters in the Professional Fighting League seemed like the natural next step. 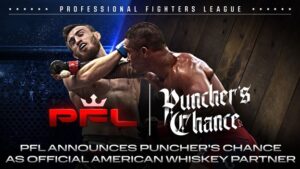 The Professional Fighters League on Feb. 9 announced the sponsorship, which will include Puncher’s Chance sponsoring all PFL regular-season events on ESPN networks and streaming platforms and being served in the VIP Lounge at season events. Puncher’s Chance also will present the “Upset of the Night” across all PFL social media channels, and a “highly recognized PFL athlete” will serve as a brand ambassador for Puncher’s Chance throughout the season, according to a news release.

“The name ‘Puncher’s Chance’ is because I was shocked when Mike Tyson was punched and knocked out in 1995 by a fighter called Buster Douglas, who was the underdog by far. People thought nobody could beat Mike Tyson, and I remember watching it with my dad, and we were both starstruck,” Luchini said.

“That underdog story made me see a similarity and metaphor to what we were trying to do in bourbon. We are a small company, we don’t have the name, the heritage, the infrastructure of the big bourbon companies. You just smell the authenticity of bourbon and the tradition. We are new to it, so we really wanted to be transparent. In the spirit of being open, we are the underdogs. I thought, what a great metaphor. What a great brand name to be called Puncher’s Chance, because it is that punch that changes the course and it is the unexpected, the one that allows the underdog to win.”

This leads us to the design for the Puncher’s Chance bottle. Luchini believes that bottles depicting animals sell better. “Think of any big brand out there in spirits, and there’s a good chance that there’s an animal,” he said. “From the bee on the patron bottle to obviously Grey Goose and Jägermeister, they’re there. I don’t know why scientifically. I have no proof. But I’m keen on putting an animal pretty much or name every packaging I developed.”

But the strategy behind his choice for the tiger on the bottle goes deeper than that. “The tiger, for me, was a great metaphor for what we’re trying to achieve. It has that power — intimidating power — but still majestic.” He noted that the tiger is the most popular symbol used among MMA fighters. Luchini even went so far as to Google tiger tattoos and found myriad photos of martial artists sporting tiger tattoos.

As for Wolf Spirit, the ultimate goal is to invest in people.

“I put myself aside, we have six people who basically can live a life and have a family and pay rent and hopefully enjoy themselves because of the jobs we are doing,” Luchini said. “And when we do these sponsorships, I prefer to invest in the people and their growth than just a billboard.”

We’re excited to see what the future holds for Puncher’s Chance. In the meantime, grab a bottle and enjoy some of the best American northwest craftsmanship out there.