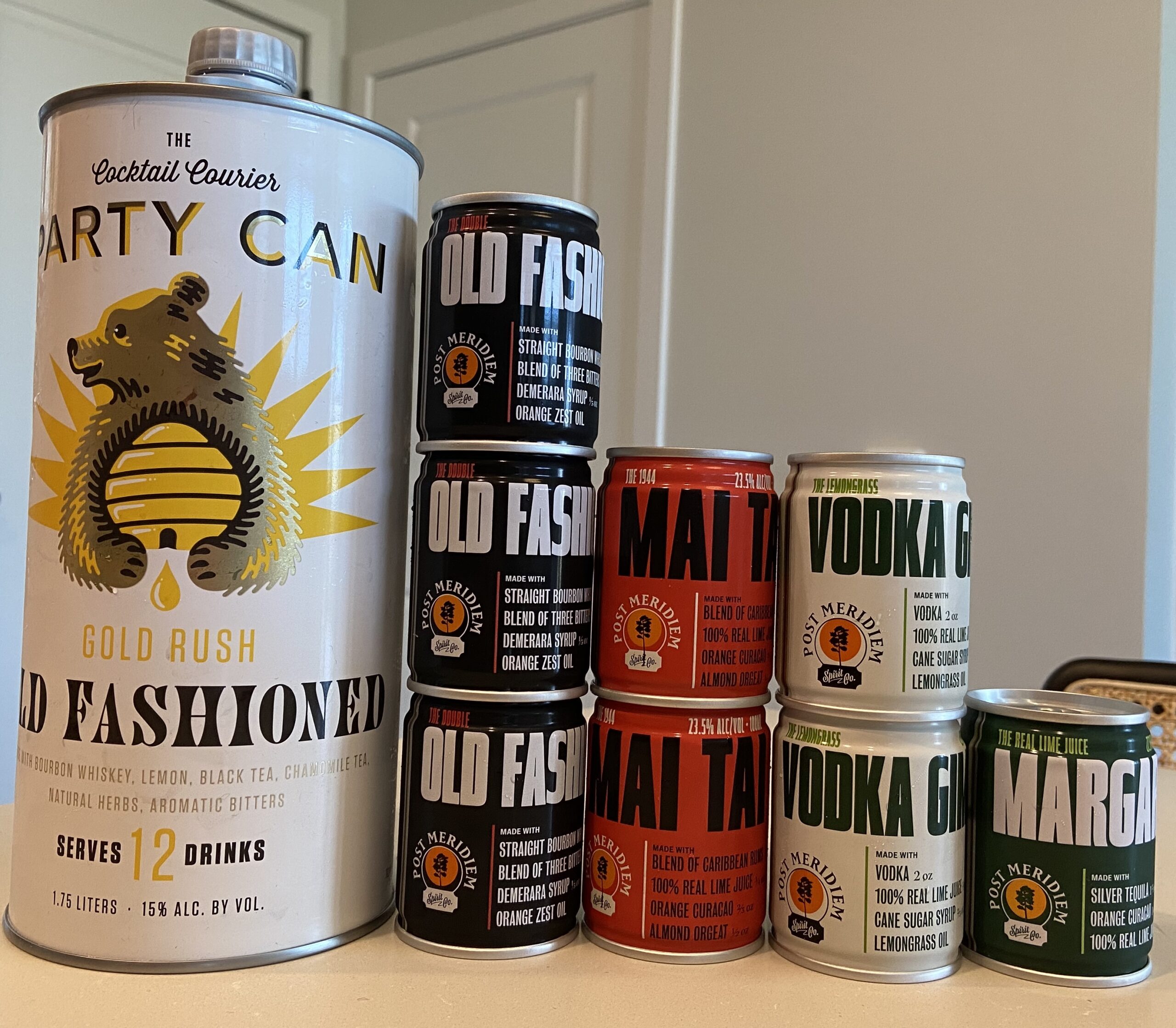 Canned cocktails have been among the biggest drinking trends this year, with dozens of new varieties popping up seemingly daily. With the market so saturated, newbies in the canned cocktail space need a niche to stand out from the crowd. Two canned cocktails that have claimed opposite but equally intriguing niches are Cocktail Courier’s Party Can, a 1.75-liter behemoth intended to serve an entire party (as its name suggests), and Post Meridiem, which offers adorably small 100-milliliter cans. 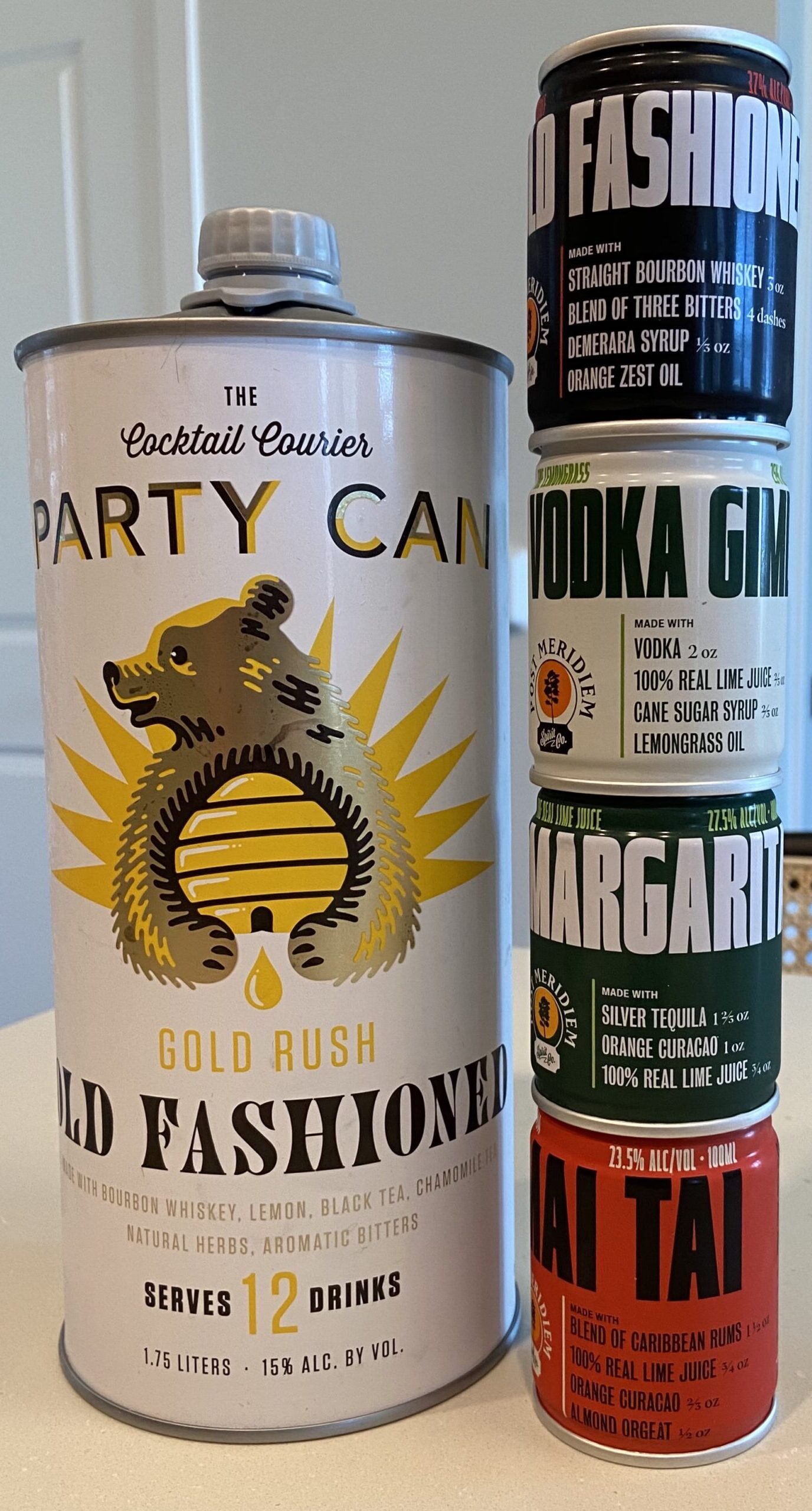 Party Can’s 1.75-liter product retails for $33.99, while a single Post Meridiem can (100 milliliters) costs $4. To buy enough Post Meridiem cans (17.5) to equal the size of a Party Can, you’d have to spend $70, so Party Can has a significant edge in cost per milliliter.

Cocktail Courier suggests that one Party Can offers 12 drinks, which equals out to $2.83 per drink. And if you’re getting 12 drinks out of the Party Can, that’s 145.8 milliliters per drink, which certainly beats out Post Meridiem’s offering of a 100-milliliter drink for $4.

Of course, there’s more to a drink than volume. We previously wrote a story about Post Meridiem back in October. The headline of that story, “These Tiny Canned Cocktails Pack a Punch,” wasn’t a lie. The average canned cocktail ranges from about 5% to 10% ABV. Party Can, at 15%, is already on the high side, but Post Meridiem blows even that out of the water, with cocktails ranging from 23.5% (Mai Tai) to 37% (Old-Fashioned) ABV. Party Can still gives you more bang for your buck, but it’s closer than you might think if you weigh alcohol content.

The ease of serving is a big deal when it comes to pre-mixed cocktails. After all, the whole point is to circumvent the effort of making your own cocktails, so the lazier these products allow you to be, the better. Fortunately, both products are incredibly easy to serve: simply chill, shake and pour over ice. 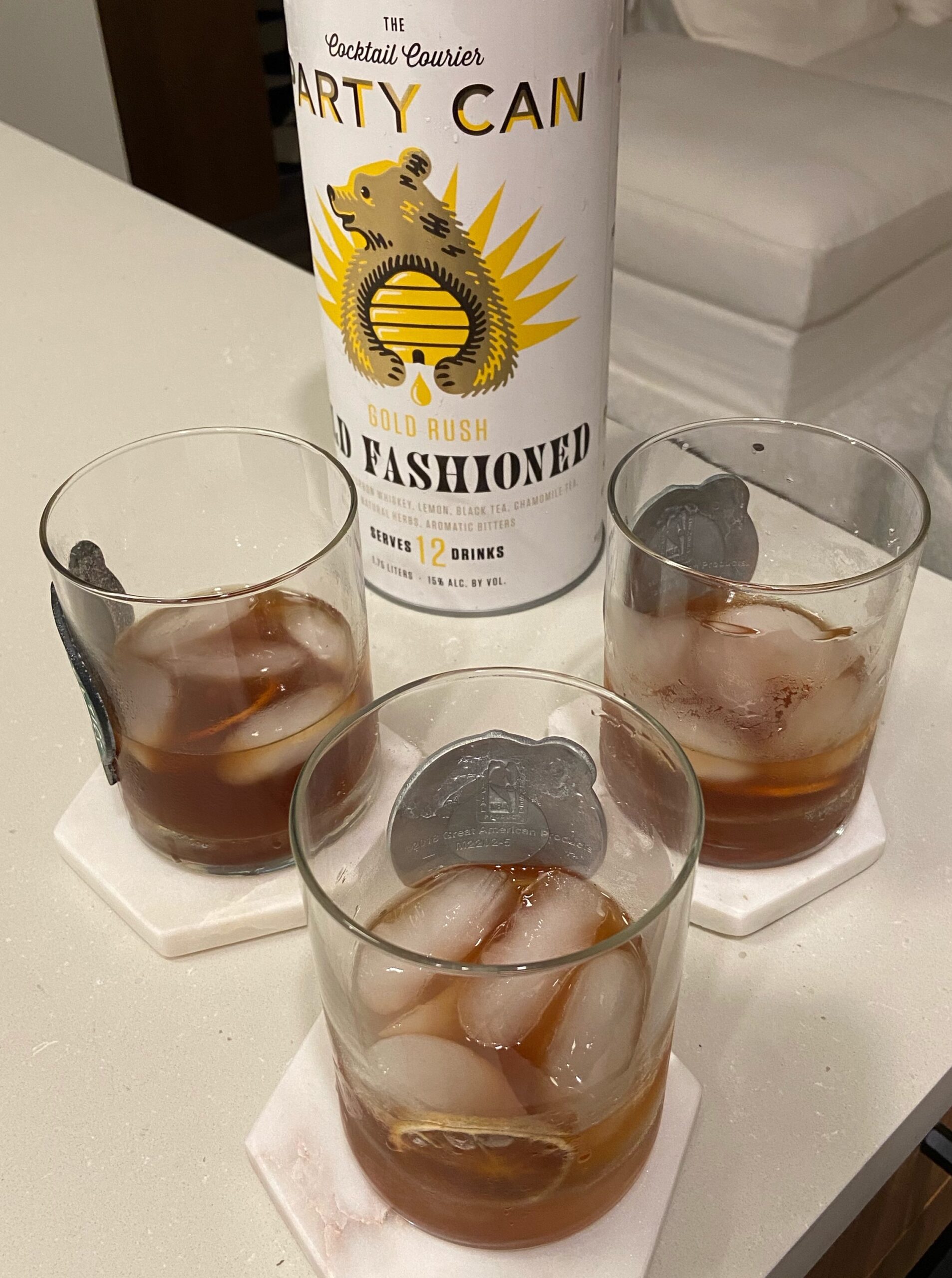 Party Can wins the battle of ease due to its product being held in a single container. One giant can leaves you with a lot less cleanup than a bunch of tiny cans. 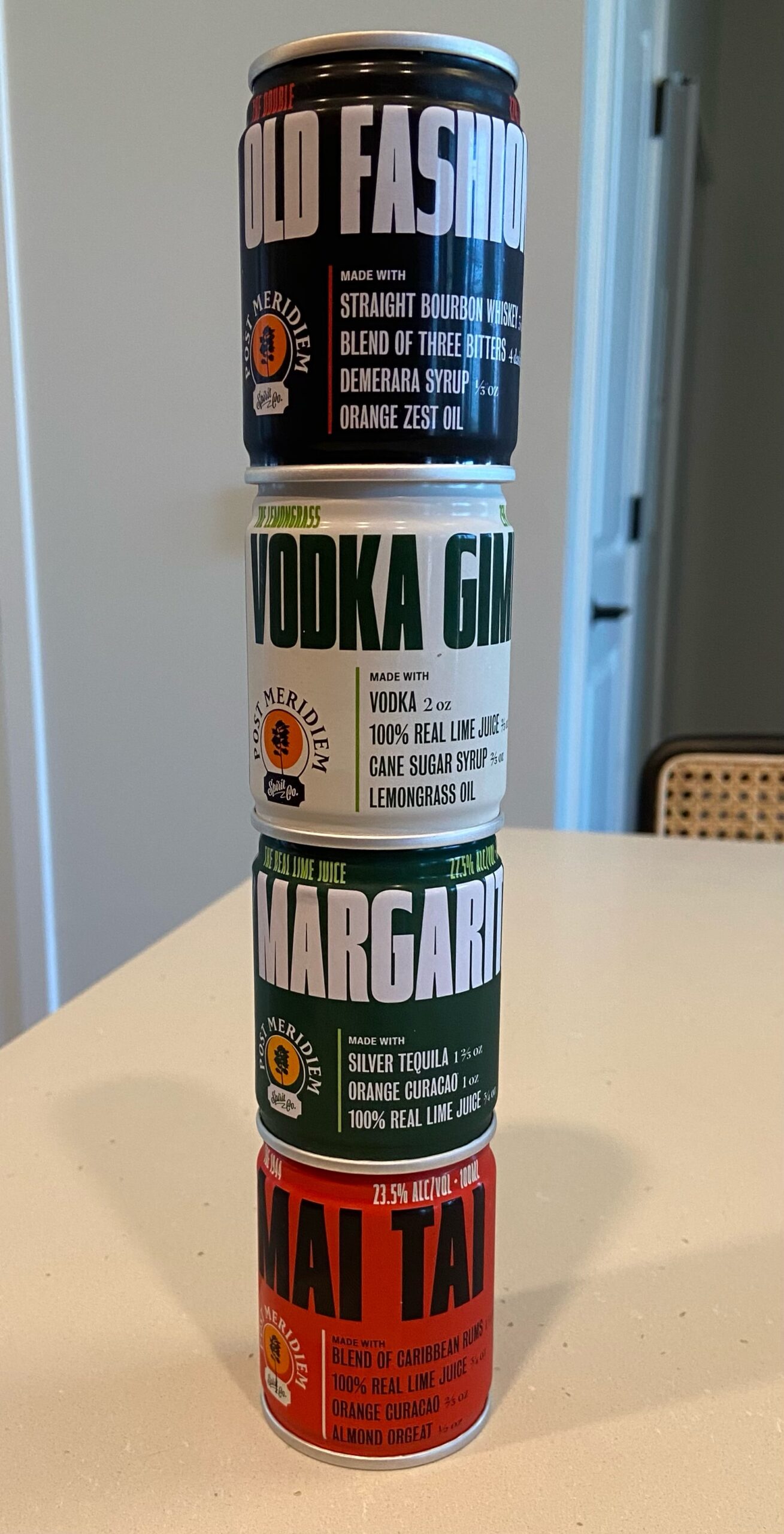 The downside of having one flavor in a mega-can is you have less room to sample different flavors. Party Can is a giant of a can, so you’ll probably find yourself buying just one. Post Meridiem’s size is much more geared toward trying different flavors; you can even buy a “Sampler” 12-pack that comes with three cans each of Margarita and Gimlet and two each of Old-Fashioned, Mai Tai and The No. Four Daiquiri.

I’m going to narrow this comparison down to Post Meridiem’s Double Old Fashioned, since the only Party Can flavor I’ve tasted is the Gold Rush Old Fashioned. 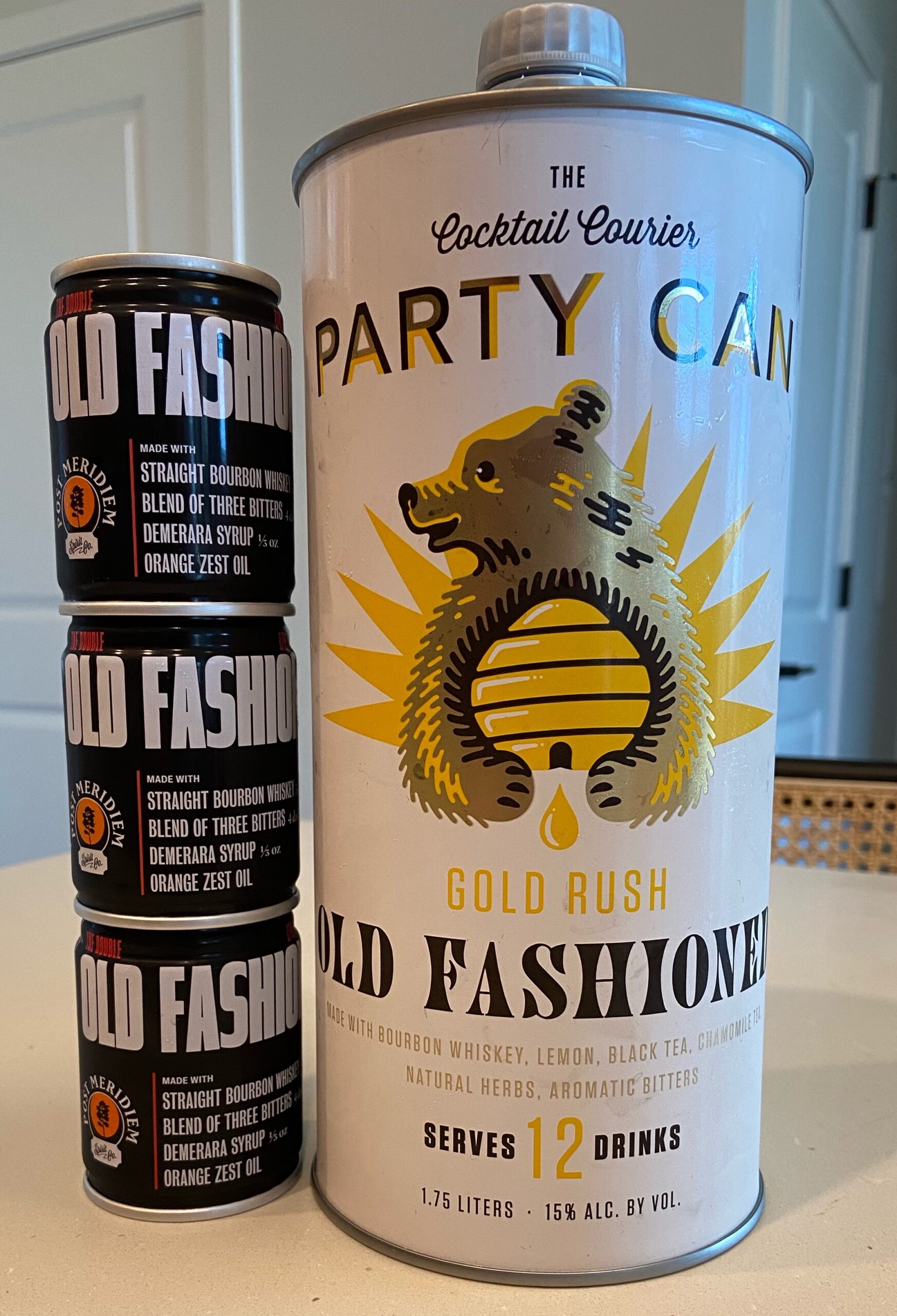 Party Can: Lots of lemon comes through, which works well here. The chamomile tea, which is a curious ingredient to add to a Gold Rush-Old-Fashioned hybrid, is prominent. Personally, I don’t love the tea flavor in here and think the drink would be better without it, but I’m not a tea drinker, so put as much stock into that opinion as you’d like. If you enjoy tea, you’ll likely enjoy this more than I did. Still, it’s good. It reminds me a bit of a hot toddy (a cold version, of course). I do wish it was a smidge stronger, but this is stronger than the average canned cocktail, so I may be in the minority on that front. Overall, I liked this but was not a big fan of the tea inclusion.

Post Meridiem: This is very nice. The bitters come through clearly in this well-balanced cocktail. It’s a really good strength for an Old-Fashioned — to me, anyway, which means those who prefer their drinks on the sweeter side may find this too strong (If you have simple syrup, or just sugar, on hand, you could always sweeten it up!). At 37% ABV, this Old Fashioned nears the minimum strength for straight whiskey (40%). Post Meridiem wins the taste test by a significant margin, so at least there’s a reason it costs more.

Better for the average party

It’s a bit of a cop-out answer to say this, but the answer to who should win this category depends on what sort of party we’re talking about. For a more intimate get-together with friends who are big fans of cocktails, Post Meridiem is definitely the way to go. Outside of that setting, however, Party Can is probably the answer. Post Meridiem will be too strong for some, which is less likely to be an issue with Party Can. That, combined with the price and ease, make Party Can the perfect drink for a party (which is good, since “party” is more than half of its name). There is something to be said for variety, however; if you only buy one can, and you or one of your guests don’t like it, you’ll be left without a backup plan. 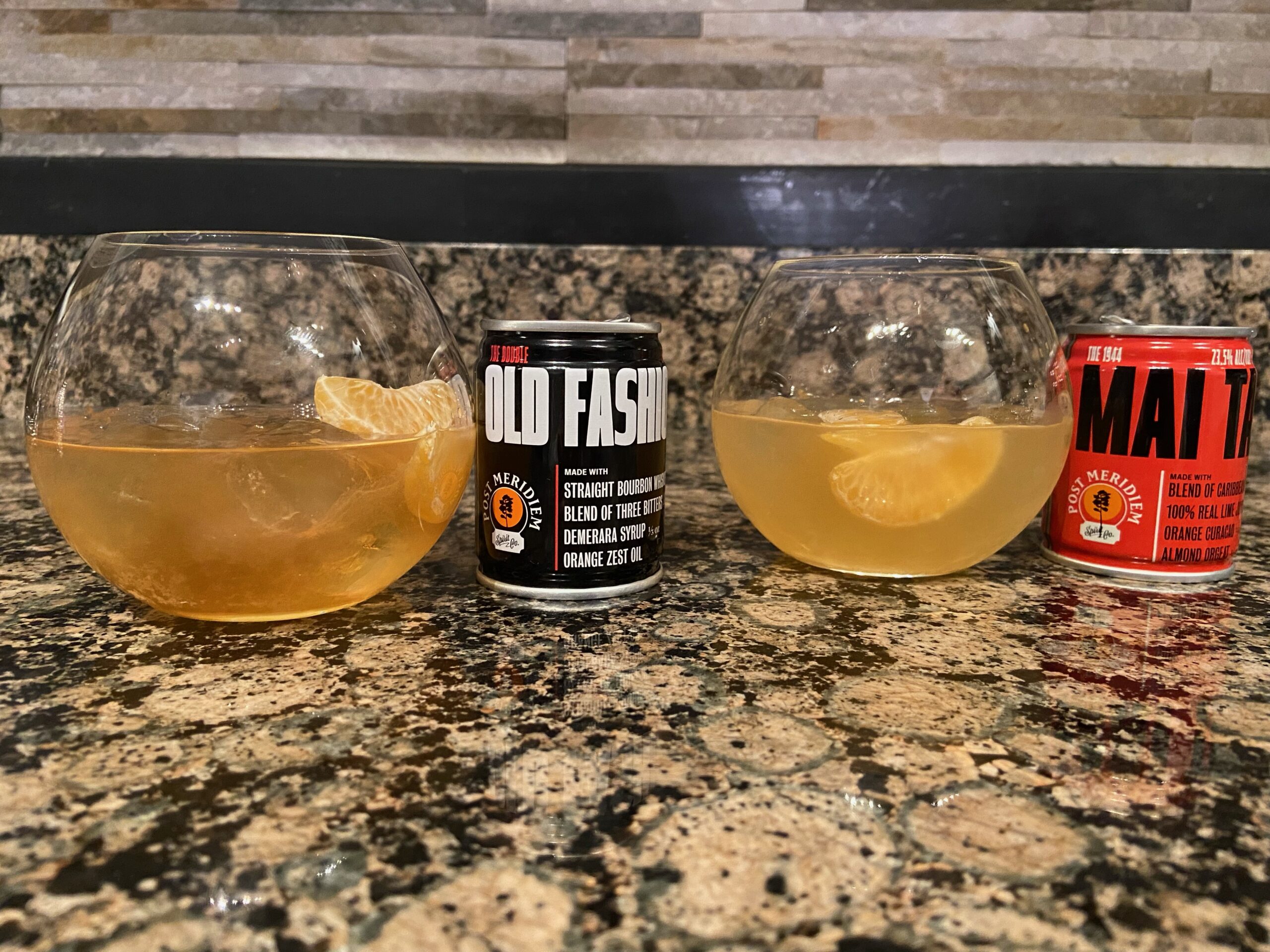 I do want to note, however, that the non-Old-Fashioned flavors of Post Meridiem would likely be better for the average party, unless you’re partying with a bunch of whiskey-lovers. The Mai Tai, Margarita and Gimlet are all super tasty and quite strong without crossing that 30% ABV mark. Either of these products should be a hit at a party, but I’m giving the advantage to Party Can for the reasons listed above.

The overall verdict and TL;DR

Party Can won the categories, 3-2, so it ends up the overall winner here, technically. It’s an efficient product that gives you a serious bang for your buck. I will say, though, that the product of the two I’d buy again is Post Meridiem, even despite the price disparity.

TL;DR: Post Meridiem and its tiny cans win the battle of taste and offer more flavors but are significantly pricier. Party Can’s jumbo product is the better offering for most parties, but Post Meridiem is the winner if we’re talking about what you’d like to sip on a Saturday afternoon by yourself or with a couple of friends.

Disclosure: Post Meridiem and Party Can provided these canned cocktails for review. No commission was made from the recommendations in this article.