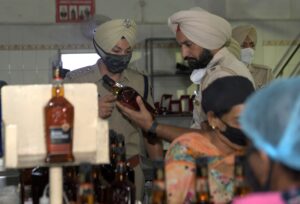 Punjab Police officers and district Administration officials inspect the quality of liquors at a distillery, following a toxic bootleg alcohol scandal in the north Indian state of Punjab, on the outskirts of Amritsar on August 10, 2020. (Photo by NARINDER NANU/AFP via Getty Images)

Bootlegging has been around for centuries, and it doesn’t look like it will be going away any time soon. The practice of selling illegally produced, or bootleg alcohol is the root of NASCAR’s founding, and with unofficial liquor shops in India starting to offer home-delivery options for their bootleg alcohol, it may only be a matter of time before India starts its own moonshine-fueled racing scene.

According to recent reports, unofficial liquor retailers, known as “belt shops” are now offering home-delivery of bootlegged alcohol via secret WhatsApp groups. This offers a convenient way for those seeking to obtain illicit alcohol to do so without having to leave their homes.

Recently, the government stated that it has abolished 43,000 “belt shops.” However, there is no clear record of how that number came to be.

The Drinks Business reported that excise officials have stated that the state has 4,300 retail outlets. The calculation for the number of belt shops was made on the assumption that there would be 10 belt shops for every retail shop. This would mean that there are 43,000 belt shops in total.

In a country where alcohol is illegal for a significant amount of the population, it’s no surprise that bootleg alcohol is rampant. India has a long history of bootlegging, and it seems that this tradition is alive and well in modern times.