This Country Aims to Boost Scotch Exports By $1.2 Billion By Lifting Whisky Tariff 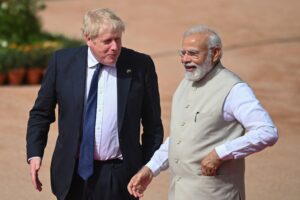 Britain’s Prime Minister Boris Johnson (left) and his Indian counterpart Narendra Modi talk during Johnson’s ceremonial reception at the Indias presidential palace Rashtrapati Bhawan in New Delhi on April 22. The United Kingdom and India are set to sign a free trade agreement that, if ratified, would lift a 150% scotch whisky tariff. (Photo by MONEY SHARMA/AFP via Getty Images)

The United Kingdom and India are set to sign a free trade agreement that, if ratified, will see a 150% scotch whisky tariff lifted. The move is expected to boost exports of the spirit by £1 billion (US$1.2bn) over five years, as the two countries look to build on an already strong relationship.

By removing the tariff not only will consumers benefit but the government will as well. The Spirits Business reported that the move will triple the market share of scotch whisky from 2% to 6% and provide greater choice and increase annual revenue by £3.4 billion ($4.1 billion).

“The India-UK FTA has the potential to be a win-win for the entire alcobev sector in India,” said Nita Kapoor, CEO of the International Spirits and Wines Association of India. “The Scotch segments of bottled-in-origin (BIO) and bottled-in-India (BII) are under 4% of the total IMFL [Indian-made foreign liquor] industry.

“With the reduction in custom duty rates whilst these segments will witness growth, it will also enable Indian manufacturers to enhance their product quality and offer new products for domestic and export markets.”

If the tariff is lifted, the government says it expects many benefits, including increased state revenue collection, increased tax compliance, elimination of the grey market and interstate product smuggling. In late November, the fourth round of talks will take place in the United Kingdom. It is hoped that a settlement will be achieved by the end of 2022.