Famed Sommelier and ‘Bon Appétit’ Host André Mack Wants You to Experience His New Whiskey, Made Using a ‘Winemaker’s Approach’ 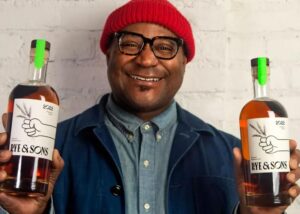 For those who don’t know, André Mack is one of the coolest and most prominent wine sommeliers around. Now, he’s moving into the whiskey world with the debut of rye whiskey called Rye & Sons.

“When you looked around at all of the old [whiskey] brands, they were pretty stodgy and named after people who died,” Mack told Food & Wine. “This is something to be able to build off of tradition but not keep with tradition.”

Another thing that keeps the rye down to earth is its $27.99 price tag. However, despite the modest price, Rye & Sons will be vintage-dated, borrowing a wine tradition to drive consumer interest.

“Rye & Sons will be vintage-dated, like wine. So it’ll still be collectible,” Mack said. “This is the winemaker’s approach in finding the best of what’s out there in the market and making the best rye we can.”

This rye isn’t Mack’s first use of the “& Sons” verbiage. The sommelier is also a restauranteur, and one of his establishments is named & Sons Ham Bar.

“Rye was America’s first whiskey, and after I opened & Sons with American charcuterie, going down the same route in whiskey with rye felt familiar to me. It was like, here’s a chance to champion something that feels really American.”