Hollywood Couple You Might Know From ‘Grey’s Anatomy,’ ‘Walking Dead’ and Much More Kicks Off Spirits Brand With Smoky Rye, Gin 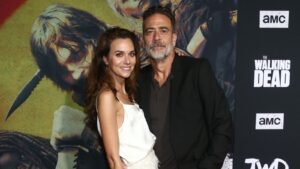 Inspired by the bounty and beauty of New York’s Hudson Valley, the first two expressions to launch from MF Libations are MF Bonfire Smoky Rye Whiskey and MF Blackberry Gin. As husband and wife, local farmers and business owners, the Morgans say they cherish the life and community they have been able to find in the Hudson Valley, and with the debut of their new line of small-batch spirits, they are able to truly celebrate the landscape and lifestyle they love- with a little mischief.

“Since the very first day we moved on to the property and saw the Mischief headstones on the farm, we knew that mischief was going to be the mission statement of all that we did – whether it be films, television, and now spirits,” Jeffrey said.

“Creating something that toasts to all the mischief in our world felt like a natural step in a debaucherous direction, and partnering with The Vale Fox Distillery to bring this vision to life was a seamless decision for us,” Hillarie added.

After the distillery’s initial encounter with the Morgan family at their Mischief Farm to talk about collaborative ways to give back to the community, they recognized that they both had a similar entrepreneurial mindset, love for their neighborhood and sense of mischief. MF Libations was formed after several months of meetings and brainstorms.

The rye is a two-year-old smoky whiskey, infused with legendary Lapsang Souchong tea from the Wuyi Mountains of Asia. The inaugural whiskey is inspired by the warm bonfires during playful and cozy nights at the Morgan’s Mischief Farm. An exquisite offering of honey and spice, the balanced rye spiciness meets an unexpected, sweet heat for a one-of-a-kind whiskey offering.