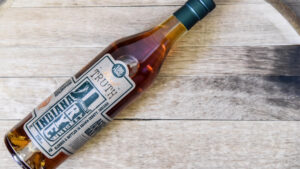 On July 1st, 2021, Indiana Rye is officially recognized as a regional whiskey style of American whiskey.

Indiana has such a longstanding history with making rye whiskey that this decision was truly a long time coming for the state. In fact, Indiana is responsible for the majority of the rye that’s available. Not to mention that MGP of Indiana distills and ages the whiskey for Angel’s Envy, Bulleit, George Dickel, High West, James E. Pepper, Redemption, WhistlePig, to name a few.

What is Indiana Rye Whiskey? House Bill 1409 Makes it official.

“July 1, 2021 is a moment of history in the world of whiskey and the world of Indiana Whiskey,” says Hard Truth Distilling Co #MasterDistiller Bryan Smith.#Rye #RyeWhiskeyhttps://t.co/TjC13NGIhx pic.twitter.com/dITLvrAWBJ

While these big names will probably not start claiming they’re Ryes are from Indiana, it is primarily a win for the smaller brands from the State.

According to a 2019 study by the Kentucky Distillers Association, the Kentucky Bourbon industry contributes US$8.6 billion annually to its economy and generates more than 20,000 jobs. It’s a lofty goal to have for the rye industry in Indiana, but one that Chris May, the state rep who spearheaded the legislation, believes the state is up for.

May stated, “we want Indiana to be as popular for its rye whiskey as it is for basketball and racing.” He continued, “Establishing that market, both in sales and tourism, might one day put the success of our state’s distilleries on par with that of the Kentucky Bourbon Trail.”

What Qualifies as an Indiana Rye Whiskey?

According to the press release, “the labelling, marketing and selling of Indiana rye whiskey includes the stipulation that it must be made in Indiana with a mash bill that comprises at least 51% rye. Furthermore, it must be fermented with sour mash or sweet mash, distilled to no more than 80% ABV, aged in barrels for at least two years, and bottled at no less than 40% ABV.”

With now more than 30 distilleries statewide, and where many great Ryes are born, it’s finally about time the state gets the recognition it deserves