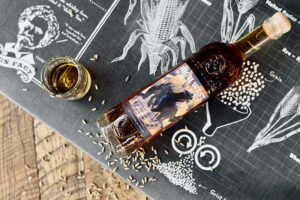 Rendezvous Rye has a new whiskey blend hitting shelves this May.

As the distillery has transitioned its flagship whiskey to being a seasonal release, they produce more of their High West pot still rye. According to High West,  “A majority vote from a blinded sensory panel of 16 panelists across Quality, Blending, Distilling, and Bartending, approved this new limited release of Rendezvous Rye stating that this blend unapologetically embodies true Rendezvous and the spirit of the West!” All while they work to maintain the same spirit of the whiskeys that came before.

New Whiskey and a New Look

Because this rye is distilled in the same older column still base, High West decided to lean into the character and flavors that the still produces, such as a well-rounded baking spice flavor. According to the distillery, expect notes of dried fruit, leather, and candied ginger. There will be increased depth and dried stone fruit complexity from potstill-esters.

The new look of the bottle’s label comes from an exciting new initiative for some new High West releases. The new project aims to allow artists to create their own interpretations of the west for the label. The first artist they enlisted is Ed Mell. High West describes Mell as a “notable western painter and sculpture who specializes in capturing the beauty, vastness, and spirit of the landscape of the American West. Ed’s painting, entitled ‘Western Bronc’, perfectly captures the original Horse and rider that was on our old Rendezvous label, with a contemporary spin.”

Rendezvous Rye is available for purchase at Reserve Bar. Looking for another good rye? Check out the Whiskey Raiders rye list and find the perfect one.