After a Trip to Greece for Inspiration, WhistlePig Launches Siren’s Song, the Latest Rye Whiskey in Rare Boss Hog Series 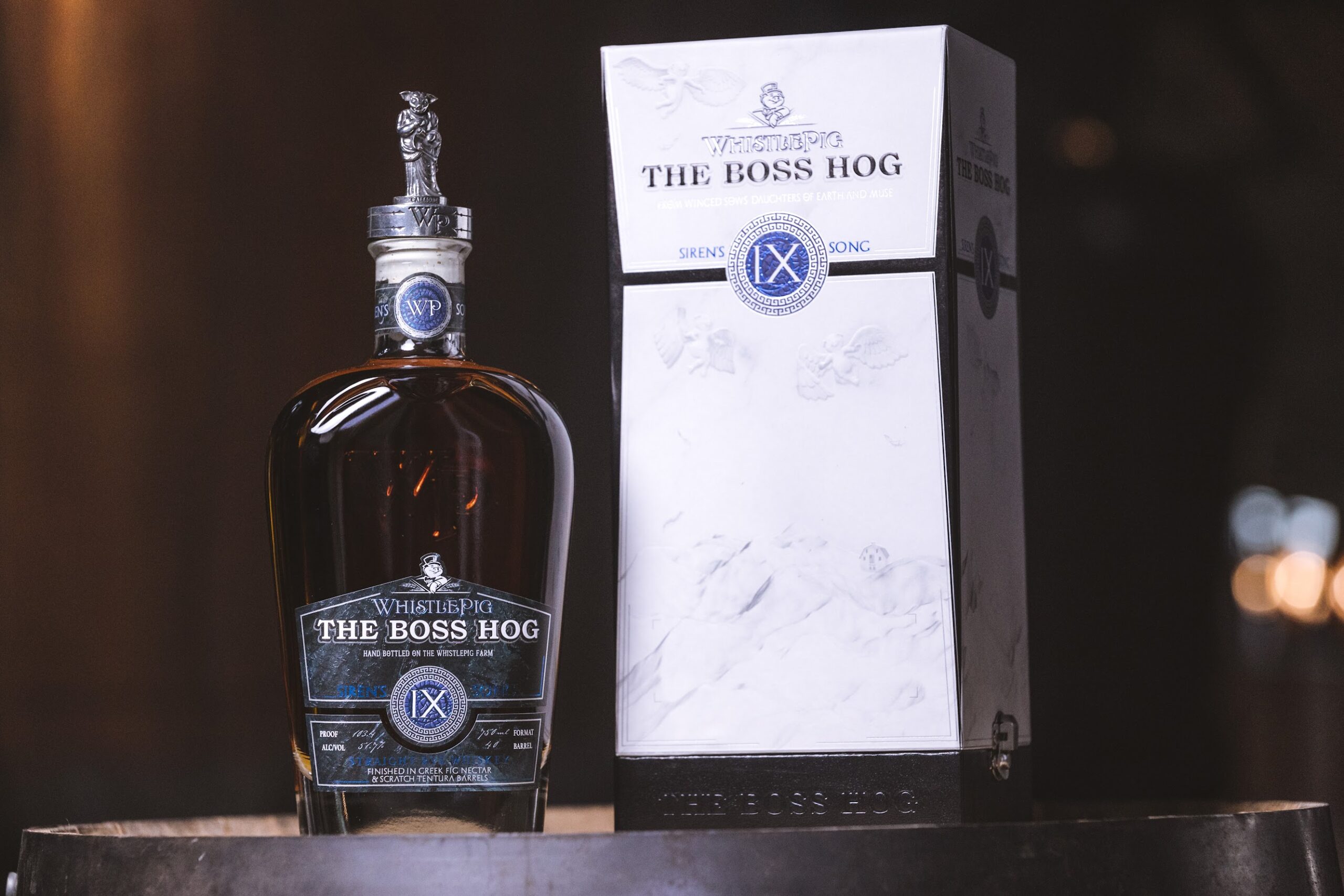 WhistlePig Whiskey, the Vermont-based brand known almost exclusively for its rye whiskeys, on Tuesday announced the release of the ninth rye whiskey in its high-end Boss Hog series.

The Boss Hog IX: Siren’s Song is a no-age-statement straight rye whiskey aged in American oak and double-finished in casks of WhistlePig’s Greek fig nectar and farm-scratch tentura, a Greek liqueur. Both finishes were created by WhistlePig on its Vermont farm using Greek and local ingredients. The tentura was made from cinnamon, clove, nutmeg, orange peel and honey.

“Every year The Boss Hog is bigger, bolder and more stupendous than the last. We are constantly trialing new finishes to find the next best whiskey experience, and in true WhistlePig fashion, this year’s edition is a world’s first,” Meghan Ireland, head blender at WhistlePig, said in a news release. “Our ambition to unlock the ultimate flavor complexity – and the nectar and tentura, which were new trials in and of themselves – was well worth the challenge once we landed the final product.”

We had the opportunity to taste this whiskey ahead of its release. We’ll have a review up in the coming weeks, but based on our first impressions, here’s what you can expect:

Nose: Complex and delicious. Sweet and floral notes are present, but the aroma is definitely spice-forward.  The nose brings tons of nutmeg and clove with cinnamon, cardamom, ginger, rose petals and rosemary, along with some sweeter notes, such as maple syrup and vanilla. Also some anise and candied orange, with faint blackberries and peppermint.

Overall: A total potpourri of spices, this intricate whiskey will keep you thinking about what you’re tasting with each sniff and sip.

WhistlePig’s all-female-led whiskey-making team traveled to Greece and drew inspiration from the nine Muses in Ancient Greek Mythology for this release. Each bottle of Siren’s Song is topped with a pewter topper depicting a pig version one of the nine muses.

“You could say the Greek Muses guided us toward the discovery and persistence of creating Siren’s Song,” said Liz Rhoades, head of whiskey development at WhistlePig. “In visiting Greece this summer to source ingredients and learn from experts at an original tentura distillery, we were drawn to the distinctly unique flavors of Greece and how they would interact with the bold flavor of our aged Rye Whiskey. We can’t wait for fans and collectors to indulge in The Boss Hog IX: Siren’s Song. Yamas!”

Melpomene, the Muse of Tragedy, is the most limited bottle offering among the nine muses.

The limited-edition Boss Hog IX: Siren’s Song is available in a 750-milliliter bottle and is bottled between 102.5 and 106.2 proof. This whiskey releases for a suggested retail price of $599.99. It will be sold at premium liquor stores, bars and restaurants across the U.S. and is now available for pre-sale at shop.whistlepigwhiskey.com.

Collectors can authenticate their bottles using near-field communication technology on the back label.

Each member of the Boss Hog series is said to cling to five promises: “single barrel, bottled at proof, powerfully complex, distinctly unique from anything they have done before and stupendous.”

In August, WhistlePig for the first time broke away from its rye whiskey tradition, releasing its second bourbon.