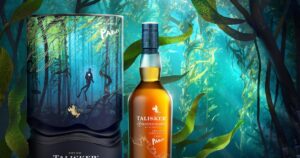 Talisker 44 Year Old, the oldest whisky to be released from the Talisker Distillery to date, was finished in marine oak casks in honor of World Oceans Day. (Photo: Diageo)

On Tuesday, Diageo announced the launch of its latest expression, Talisker 44 Year Old. This is the oldest whisky to be released from the Talisker Distillery — founded in 1830 — to date, and it was finished in marine oak casks in honor of World Oceans Day, which takes place next month, June 8.

This most recent edition was inspired by the world’s oceans and an expedition led by Talisker’s partner in ocean conservation, Parley for the Oceans, to one of the world’s largest sea kelp forests near the Cape of Good Hope.

A crew of researchers, activists and filmmakers dove into the depths of ‘The Great African Sea Forest’. According to The Whiskey Business, Talisker cask staves were taken on the vessel and later charred using a small amount of sustainably farmed Scottish sea kelp and stave wood shavings. The whisky was then finished in marine oak casks before bottling.

The continued collaboration between Talisker and Parley ensures that long-term, the partnership will raise awareness and support the protection and conservation of 100 million square meters of marine ecosystems around the world by 2023.

The 44-year-old Talisker is limited to only 1,997 bottles and will be available later this month from specialist retailers, for an MSRP of $4,745.95.