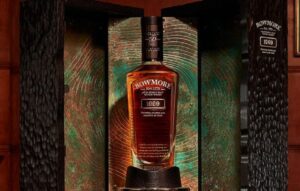 Bowmore Distillery announced the launch of its final whisky in the Vaults Series: an ‘ultra rare’ single malt from 1969.

The new collection features some of the rarest Bowmore whiskies in the world, drawn from the Islay distillery’s most precious stocks. The series includes the last in the highly successful 50-year-old vault series, the Bowmore 1969, as well as the exclusive 2021 releases of Bowmore 30-year-old and Bowmore 40-year-old.

David Turner, Bowmore Distillery manager, said: ‘These exquisite, aged and rare launches are a credit to the Bowmore portfolio and continue to drive our desire to produce highly revered products.”

Bowmore 1969 is an exceedingly rare single malt that has been carefully maintained for five decades. During the lengthy maturation process, the scotch became increasingly richer as fruit and smoke flavors remain constant.