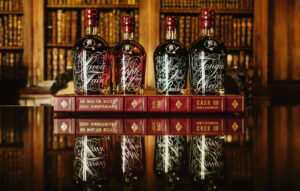 Cask 88, a whisky bottler based in the Scottish Borders, unveils a collection of four special bottles to commemorate Sir Walter Scott.

Sir Walter Scott was a Scottish historical novelist, poet, playwright and historian. According to Scottish Field, each bottle is named after a phrase made famous by Scott. “Lock, Stock and Barrel” was finished in an oloroso sherry octave. “Savoir Faire” spent time in a red wine firkin. “The Apple of My Eye” completed its aging in a virgin oak firkin. “Tongue in Cheek” matured in a pedro ximénez sherry octave.
Scott maintained a scotch lover’s reputation and is even credited for introducing King George IV to whisky during his infamous visit to Edinburgh in 1822, as stated by Scottish Field.

Martin Daraz, managing director at Cask 88, stated, “With this unique collection, our head of whisky, James Zorab, has outdone himself. The four bottles offer a rare opportunity to really savour the effect different cask finishes have on the flavour and texture of one single malt.”

“It is a true honour for our company to celebrate the legacy of Sir Walter Scott, and I can think of no more fitting tribute than releasing not one but four excellent whiskies that he would no doubt have enjoyed himself.”

The 50 sets of four bottles go on sale on Friday, priced at $1,250, with a waiting list opening on World Whisky Day.