COP26 to Have Special Batch of Scotch | Whiskey Raiders
Article 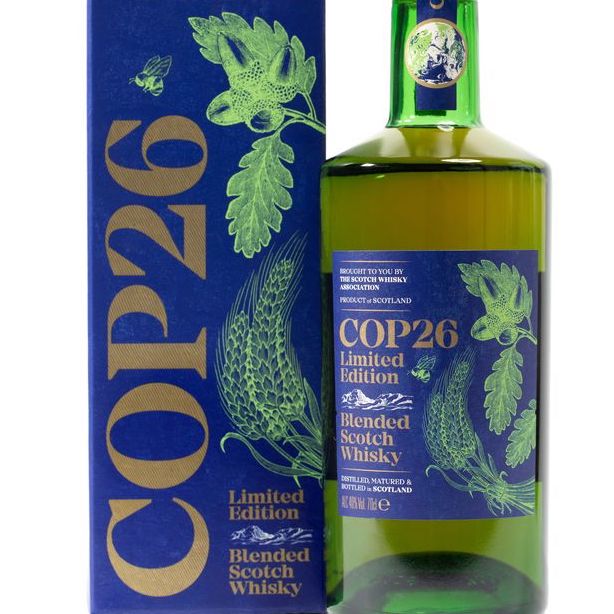 Only 900 bottles of this limited-edition whisky were made. The whisky will be enjoyed by those in attendance at the COP26 conference. (Photo: Scotch Whisky Association)

The Scotch Whisky Association is bringing a limited-edition batch of scotch whisky to COP26, the United Nations’ Climate Change Conference, for world leaders, delegates and conference-goers to enjoy.

In honor of this being the 26th annual Conference of the Parties, the whisky is a blend of whiskies produced at 26 Scottish distilleries. It was blended and bottled in Glasgow, the city hosting the conference. Only 900 bottles of the whisky exist.

In a display of the scotch whisky industry’s commitment to sustainability, this whisky was bottled in bottles made from 97% recycled glass with a fully recyclable stopper created from natural cork, recycled wood and recycled cork particles. The label paper contains 55% post-consumer recycled fibers, and the carton is made from 100% recycled fibers.

World leaders coming to Glasgow for COP26 will receive “a warm UK welcome which will include the chance to sample a limited edition whisky blend produced sustainably in Scotland, especially for COP,” a COP26 spokesperson said, per The Scottish Field.

The scotch whisky industry has become much more sustainable over the past decade, reducing greenhouse gas emissions by 34%, improving water efficiency by 22% and reducing landfill waste by 75%, according to The Scottish Field. Spirits behemoth Diageo, whose scotch brands include Johnnie Walker, Lagavulin and Talisker, has been at the forefront of this charge, opening an entirely carbon-neutral distillery and creating the world’s most sustainable glass whisky bottle.

Pope Francis initially was supposed to attend the conference but recently canceled his trip, which is a real shame; he assuredly would have loved this scotch, considering he is a huge proponent of reducing climate change and once called scotch “the real holy water.”