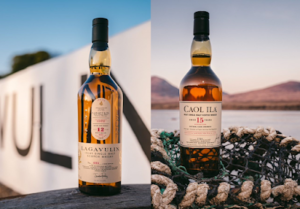 On Thursday, Diageo announced the launch of its 2022 Lagavulin and Caol Ila Fèis Ìle (Islay Festival) limited editions. This year’s bottlings are also said to celebrate the reunion of whisky fans from all over the world at this year’s festival, as they come together for this key moment in the whisky calendar for the first time in two years.

The first scotch release, limited to 6,336 bottles, is Lagavulin Fèis Ìle 2022 12-Year-Old (57.7% ABV). It was initially matured in refill American oak hogsheads before being finished in virgin American oak casks.

Jordan Paisley, Lagavulin Distillery Manager said, “I’m proudly celebrating my first Fèis Ìle as Lagavulin’s Distillery manager and I’m excited to reveal such an unusual bottling. We are all looking forward to welcoming Lagavulin fans back to Islay after two years and reuniting together for a dram and fantastic music.”

Samuel Hale, Caol Ila Distillery Manager also commented on the release, saying, “We are so happy to be hosting Fèis Ìle on Islay this year and continue our annual celebrations to honour such a remarkable bottling. After years of hosting the event online, we’re excited to greet whisky and music lovers again from around the globe.”