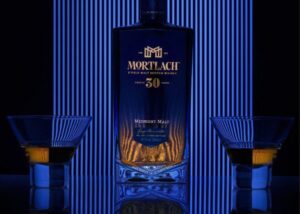 Tasting notes say nose of the new expression features herbal top notes, which indicate pork crackling and dry sage. The flavor is described as winey, with apple, spice and black pepper. The finish is said to be long and sweet with a spicy aftertaste.

“There is an art and science to the creation of whisky, born of an unabating quest to wield flavour – a journey that is complex, evolving into unknown directions, only to finally reveal itself as the patient labour of visionary at work.” Dr. Craig Wilson, Diageo master of malt, said.

Mortlach is a Speyside scotch whisky brand that was founded in the early 1800s. The brand is best known for its single malt whisky, which is made using a process called “partial double distillation.” Mortlach claims this process results in a richer, more robust flavor than traditional single malt whiskies. Mortlach’s flagship product is the 12-year-old Mortlach whisky, which has earned solid reviews from critics.