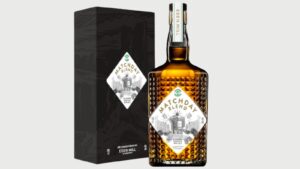 A limited-edition whisky called Matchday Blend, created by award-winning Scottish distiller Eden Mill St Andrews, has launched to celebrate some of soccer club Hibernian FC’s most iconic memories. Craftsmen at Eden Mill, who are based in St. Andrews, developed the bespoke dram to allow Hibs fans to toast their favourite moments with a drink that will never be replicated again.

Eden Mill St Andrews has been a gin sponsor for the club for many years, but this season is the first time it has joined as an official whisky partner.

According to Scottish Field, the edition of this rare and exclusive Scotch Whisky is limited to 800 bottles, each priced at around $95. The release is intended to give fans and whisky lovers alike the chance to enjoy a historical bit of Scottish football history. The drink is made up of a blend of bourbon-matured and sherry-finished whiskies, as well as Eden Mill St Andrews peated single malt.

For those who prefer gin, Eden Mill St Andrews has also created a limited number of bottles of their Matchday Spirit Hibernian Dry Gin, priced at $54, which has been a fan favourite since launching last year.