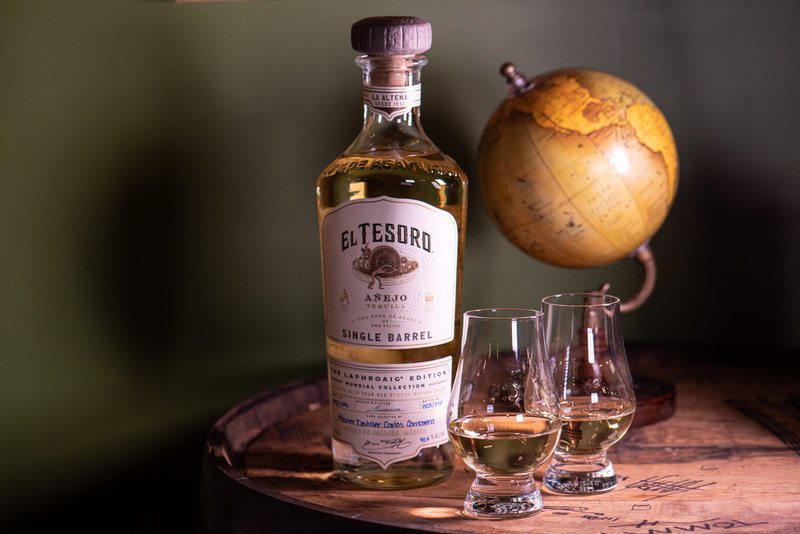 El Tesoro Tequila on Tuesday announced a new line of tequilas: the “Mundial” Limited Edition Series. “Mundial” expressions will see one-of-a-kind single barrels of El Tesoro tequilas finished in unique casks that have previously held spirits from around the world. The first release in the series The Laphroaig Edition, a limited-edition bottling that imbues the tequila with scotch whisky notes.

The 40% ABV tequila is aged for nine months in ex-bourbon barrels and then finished for four months in Laphroaig 10-Year-Old casks.

The Laphroaig Edition will be available in select markets at retailers and bars/restaurants beginning mid-November for a suggested retail price of $125.

“We are thrilled to introduce this beautiful, exciting new spirit in collaboration with our friends at Laphroaig,” Carlos Camarena, master distiller for El Tesoro, said in a news release. “While we continue upholding the traditional processes that have made El Tesoro the treasure of Jalisco, we also like to experiment with ways to bring Tequila production to a different level. The Laphroaig finish imparts a slight whiff of smoke on the nose but not heavy peat as one might expect. It is just enough to create a specific spiciness that shows how well the peatiness of Laphroaig intertwines and complements the deep, rich agave flavors we are most proud of with our El Tesoro Añejo.”

El Tesoro says that notes will vary as the release consists of single barrel expressions, meaning each barrel presents a slightly different profile. The general taste profile is:

El Tesoro and Laphroaig both are owned by Beam Suntory, so this collaboration makes a lot of sense. Brands owned by the same parent company often collaborate; a recent example is bourbon company Four Roses and brewery New Belgium, both owned by Kirin Holdings.