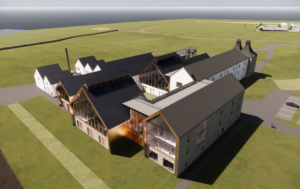 Plans for the new Portintruan Distillery. Image via Elixer Distillers.

Elixer Distillers has confirmed the new name of its Islay distillery: Portintruan.

Located just outside the town of Port Ellen on Islay’s south coast, on the way to Laphroaig, Lagavulin, and Ardbeg distilleries. The new Portintruan distillery is said to be where the past will meet the future, combining old-style production techniques with modern technology.

Commenting on the news, Sukhinder Singh, Co-Founder of Elixir Distillers, said: “Elixir Distillers has always taken a flavour-led approach and this will be the Portintruan philosophy as well. We will be utilizing a number of old-style production techniques which we believe will accentuate the depth and character of the spirit. A key part of the process will be using malt predominantly from our own floor maltings on-site, and we will be using direct-fired wash stills for the distillation. We plan to work with different phenol levels across the range, which will all have their own specific flavour profiles.”

Elixir Distillers will be building an experimental distillery on the location, allowing it to double as a site for two distilleries. This will allow the team to create not just different Scotch whisky types but also rum.

The Whisky Business reported that the plans for the distillery site also include 14 houses for Islay families working at the distillery, a visitor’s center, a bar and restaurant, a tasting room bothy overlooking the sea, and a multi-purpose educational facility that will serve as a base for an apprentice program to train the next generation of distillers.