Next chapter For Glenmorangie is Distillery Solely Dedicated to Experimentation 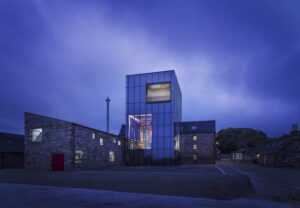 The Lighthouse (image via Glenmorangie)

Glenmorangie has been known as a pioneer of sorts when it comes to single malt Scotch whisky, from mocha flavors to wood finishing and now a new, innovative distillery.

Inspired by the “What if…?” Approach

Dr. Bill Lumsden, Director of Whisky Creation, conceived the idea of the Lighthouse Distillery for Whisky Creation from his “What if” approach. Lumsden is continuously dreaming up new whiskies, and The Lighthouse will be dedicated to experiments and innovation in single malt Scotch.

“The Lighthouse is our new home of imagination,” Lumsden said. “Here, we can indulge our most fantastical ideas as we strive to create a whole array of different flavours. We will be able to play with whisky’s core ingredients, making small adjustments and big changes in ways never tried before. Nothing is off limits in the Lighthouse, as long as it’s delicious.”

The Lighthouse is dedicated to innovation rather than production, and the location will yield several different labs and places for experimentation.

Copper Stills in The Lighthouse. Image via Glenmorangie.

The Lighthouse is home to two signature copper stills, which enable Glenmorangie’s signature fruity spirit to come to life. Standing almost 20 feet tall, they allow more space for taste and aroma. But these new stills have a host of modifications, which is what makes innovation possible. Above the stillhouse is a purpose-built sensory laboratory.

With the distillery’s history of shaking up the way we think about single malt Scotch, it will be exciting to see what comes out of the Lighthouse.