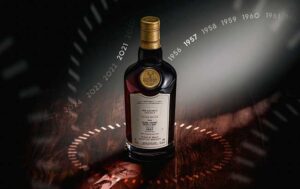 Gordon and MacPhail 64-year-old whisky is the second release in the Mr. George Legacy series.

Gordon and MacPhail has unveiled a 64-year-old single malt. The new whiskey is the second release in the second bottling in its Mr. George Legacy series.

The series honors George Urquhart, a second-generation member of the Gordon and MacPhail family. His grandson, Stuart, is the brand’s operations director.

Stuart describes his grandfather as: “He was intrigued to know how long the whisky might take to reach its peak, and would have known he might not be around when that moment came. That is his legacy to our family and to whisky drinkers who love the rich complexity of the ultra-aged single malts he laid down decades ago.”

There will only be 298 bottles released of the newest expression, and each will retail for over $7,000. The whisky celebrates the “long-term approach” to maturation that George had. The 64-year-old expression spent its entire maturation in a first-fill Sherry butt.

At 56.1% ABV, Mr. George Legacy 1957 delivers aromas of fruitcake, festive spices, marmalade, and treacle, while on the palate flavors of morello cherries, tobacco, and garden mint are present. The finish boasts notes of spice, fruit, and charred oak.