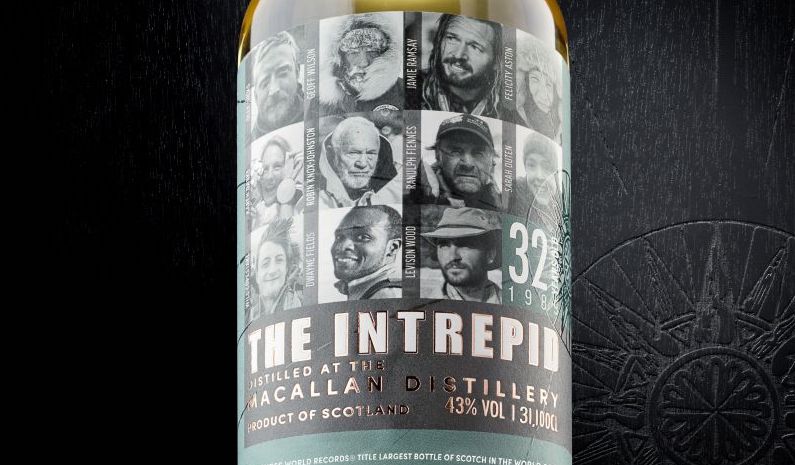 The Intrepid, the world’s largest bottle of scotch whisky, will head to auction in May. (Photo: Lyon & Turnbull)

The world’s largest bottle of scotch whisky — which stands near 6 feet tall and is filled with 311 liters of 32-year-old Macallan single malt whisky — is set to be sold at auction in Edinburgh, Scotland.

It will be sold by auction house Lyon & Turnbull. After £1.3 million ($1.62 million), 25 percent of the sale will be donated to the Marie Curie charity.

The auction will go live online at noon GMT on May 25 and is set to attract interest from bidders across the world.

The bottle holds an amount of whisky equivalent to 444 standard bottles.

The time behind The Intrepid say the bottle was named to celebrate the drive and record-breaking achievements of 11 explorers who are featured on the bottle: Sir Ranulph Fiennes, Sir Robin Knox-Johnston, Dr. Geoff Wilson, Karen Darke MBE, Olly Hicks, Sarah Outen MBE, Dwayne Fields FRGS, Levison Wood FRGS, Felicity Aston MBE and past Scottish Adventurers of the Year Jamie Ramsay and Will Copestake

The project will support the explorers’ chosen environmental, physical and mental well-being charities. These include Marie Curie, selected by Sir Ranulph Fiennes; and Campaign Against Living Miserably, chosen by Jamie Ramsay.

“I’m sure there will be significant global interest in the auction of The Intrepid, a unique collection spearheaded by the record-breaking bottling standing at an incredible 5ft 11 inches tall,” Colin Fraser of Lyon & Turnbull said, according to the Daily Record. “Bidders will have the chance to buy a piece of Scotch whisky history. They will become the owners of an exclusive 32-year old single-malt Scotch from what is widely regarded as one of the world’s best distilleries, The Macallan.”

To commemorate the sale of The Intrepid, a small number of exclusive bottle sets were produced, comprising a collection of 12 bottles, each filled with the remaining 32-year old Macallan whisky from the same casks used to fill the world-record bottle. Each set includes a replica of the main bottle design along with individual versions dedicated to each of the explorers associated with the project.