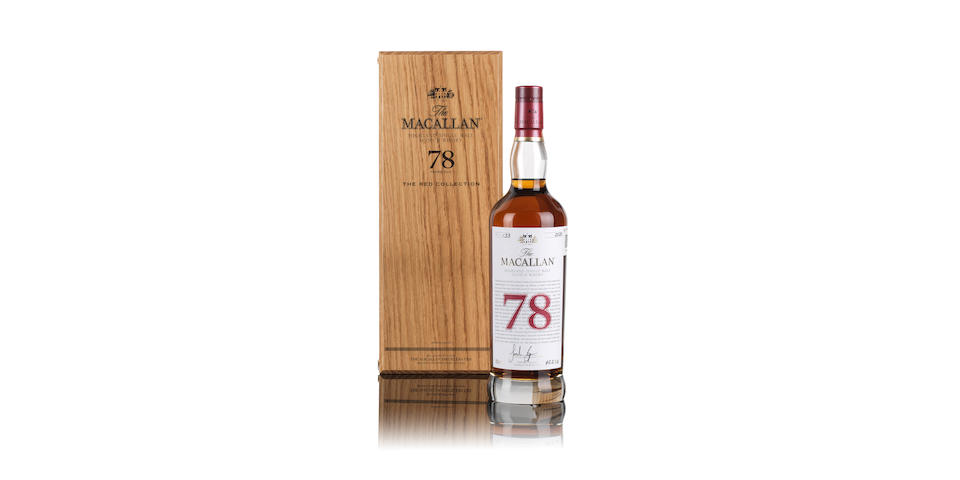 “I am delighted by the great result achieved for this very special whisky,” Martin Green, Bonhams head of whisky, said in a news release. “As expected, the bottle attracted intense bidding from collectors across the world and the excellence and rarity of the whisky are reflected in the very impressive price.’

Coming from Macallan’s Red Collection, the bottle is number 133 of a limited edition and was presented in its original oak and Bridge of Weir leather-lined case. It was estimated to sell for £65,000-70,000.

Previous Bonhams Whisky Sales included a decanter of The Macallan Lalique 55 Years Old selling for about $112,000 in December and a 250-milliliter bottle of Karuizawa 47 Year Old Japanese whisky in January.

The world’s oldest known whisky is an 81-year-old from The Macallan.

Color: Sunset on the Spey

Nose: A fresh fruit medley of apple, peach and grape moving into fresh lime and verbena. Antique oak and soft leather move quickly into a luxurious dark chocolate and dried fruit sensation. The dried fruits are a balance of dates and raisins. Finally, a rich inviting vanilla cake.

Palate: Warming oak spice of nutmeg and ginger open into the rich dried fruits of raisin, prune, date and a hint of almond nuttiness. The oak rich whisky is warming yet dry with powerful treacle toffee and a baked apple sweetness.

Finish: A long thought provoking finish, all of the flavours from the nose and the taste make an appearance in this finish….Remarkable.