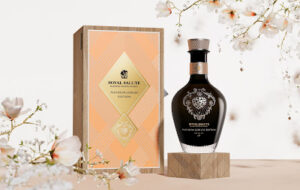 Bottled at 50.8% ABV, Royal Salute Platinum Jubilee Edition is a blended scotch whisky that includes whiskies from a number of closed “silent” distilleries. It was finished in Tawny Port casks for two years, as a tribute to the wine served on the coronation day of Queen Elizabeth II in 1953.

“For this momentous occasion I wanted to create a blend that captured Royal Salute’s unique heritage while honoring the Queen’s seven decades of reign,” Sandy Hislop, Royal Salute master blender, said, according to DFNI Magazine. “We have expertly achieved this by using incredibly rare whisky from no fewer than seven stills to represent her time on the throne. It is an honor to have had a role to play in this piece of history; a task that has allowed us to release a prestigious whisky that also acts as a precious collector’s item for whisky lovers to cherish.”

This limited-edition whisky is presented in a bespoke hand-blown Dartington glass decanter. The box the decanter comes in features seven embossed lines, representing the seven decades of Her Majesty’s reign. Limited to 147 bottles, Royal Salute Platinum Jubilee Edition will be available later this month from select specialist retailers and travel retail outlets for a recommended retail price of $20,000.