In February, scotch whisky brand Mortlach premiered its Mortlach By Design series, a six-part program that sees the distillery partner with some of the world’s best designers on bespoke design projects. On Thursday, the brand unveiled the second and third iterations of the series for NYCxDesign, New York City’s annual official celebration of design.

The first new product was created with American industrial designer Joe Doucet. The piece is a chair titled Tropos. 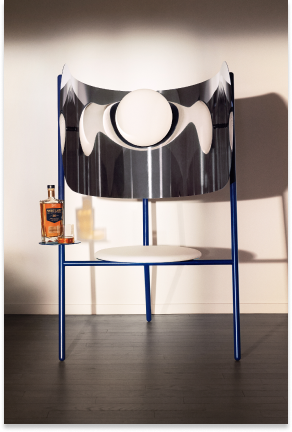 Tropos was inspired by “The Way,” the distillation process unique to Mortlach that has been passed down by distillers for generations, the brand said in a news release. The resulting whisky produced by distillation in six distinct stills – an element of “The Way” – was the driving force behind Doucet’s creative process. Tropos translates to “The Way” in Greek.

“Tasting whisky requires an environment in which to taste it, so I focused on a chair,” Doucet said. “I really wanted to heighten the sensory experience of drinking Mortlach; of sniffing, of smelling, of fully embracing all its complexity. So I created a chair that envelopes you. Not only does it shut out the external world, but it really amplifies the internal experience, reflecting every dimension of the experience back to you and a way that I felt paid homage to the whisky.”

SHIFT, by Dutch designer Sabine Marcelis, is a bar cart that the brand describes as incredibly dynamic. The brown and honey colors of the glass are intended to imitate the tint and transparency of Mortlach liquid. 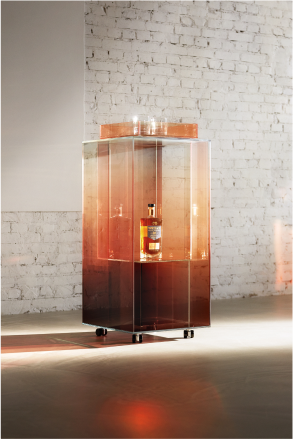 “Similar to how Mortlach reveals its layered flavors upon tasting, the bar cart reveals its dynamic layers when explored and used to serve,” Marcelis said.

The top piece of the bar cart is loose, so it can be used as a tray, left on top or removed. The bar cart is mobile, with wheels giving it the flexibility to move with the user.

“The tasting experience of Mortlach is very much about an evolution of intensity, where you have this very robust first sip, which then mellows out,” marcelis said. “That is taken into the bar cart as well, where you have these strong colors at the base, and then they mellow out as they go further along the materiality.

“I was also inspired by the Mortlach bottle, which has this very strict exterior, and then a softly offset interior, creating this beautiful depth perception of the whisky itself. I wanted to bring that back in the bar cart, so that you feel this sense of depth.”

Part one of the Mortlach by Design series was a decanter crafted by Italian designer Luca Nichetto.