The Second Bottling from Nick Offerman and Lagavulin: Single Malt Scotch Is Aged in Guinness Casks

Many are familiar with the beloved Parks and Recreation character, Ron Swanson, and his love for Lagavulin Whisky. However, the two have collaborated not once but for a second time and just in time for World Whisky Day and Father’s Day.

#ad My Dad & I love to work together & we were lucky enough to collaborate on this very good new adult beverage, melodiously named @LagavulinWhisky Offerman Edition: @GuinnessUS Cask Finish. The gang wants to call the new flavor effect “sweet peat”, and I said ok, so… pic.twitter.com/qSWq8QAsT9

The limited-edition 11 Year Old Lagavulin is aged for four months in former Guinness Beer casks from the Open Gate Brewery in Maryland is a true father-son creation. Lagavulin says this was Offerman’s most ambitious creation yet worthy of the original Mr. Offerman’s approval.

According to Malts.com, the Lagavulin and Offerman collaboration began back in 2014 when the team introduced the Lagavulin: My Tales of Whisky series. Ric, Offerman’s father, appeared in various spots during the show’s run where he would showcase everything from woodworking to his “insistent preference for medium-rare steaks.” So it only seems natural that Nick would create a whisky as an ode to the man who has impacted his life most. 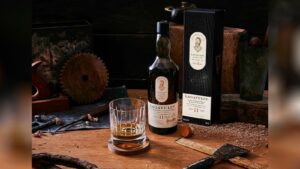 Due to the combination of the intense peat and charred wood notes of Lagavulin with the roasted coffee, dark chocolate, and sweet caramel notes from the Guinness casks, drinkers can expect “sweet peat” flavors. The limited-edition Single Malt’s suggested retail price is $79.99 and can be purchased from ReserveBar.com.

“The opportunity to collaborate on this truly sublime, smoky giggle-juice renews my gratitude for the simple things in life, like a father’s love, and the good manners he taught me,” said Nick Offerman.