A new multi-year partnership has recently been announced between Dewers Blended Scotch Whisky and the U.S. Open Championship.

“DEWAR’S and the U.S. Open Championship share many of the same values rooted in a passion for the game and an embrace of its spirit of sportsmanship, authenticity and camaraderie. We are truly delighted to partner with the U.S. Open Championship to bring exciting and memorable experiences to fans around this special event,” Says Brian Cox, Vice President of DEWAR’S North America.

As part of the contract, Dewers is set to produce a special limited-edition commemorative bottle each year. The first of such bottles will be released this year in May 2021. It will be a 19-year-old blended Scotch whisky double-aged and finished in the finest first-fill American ex-bourbon casks PRN. 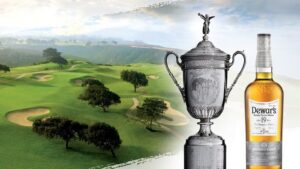 A portion of the proceeds of the bottle will also go toward the USGA. The USGA is a non-profit that serves and advances golf, including the U.S. Open and U.S. Women’s Open. Their commitment is to make the game of golf accessible and enjoyable for everyone and creating a healthier relationship between courses and the environment.

Are you as excited as us about the partnership between Dewar’s and the U.S. Open Championship? Check out Dewar’s Whiskey Raider’s scores and pick up a bottle to celebrate today.