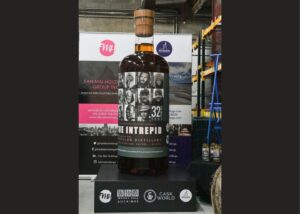 Scotch whisky enthusiasts were out in force on May 25 as the world’s largest bottle of whisky was auctioned for £1.1 million ($1.38 million) in Edinburgh, Scotland.

The Intrepid, as it is aptly named, contains 311 liters of 1989 Macallan single malt and measures 5 feet 11 inches tall. This unique collaboration between Rosewin Holdings and Fah Mai was a celebration of the incredible achievements of 11 explorers, including Sir Ranulph Fiennes.

The bottle was expected to shatter records with a final sale of £1.5 million ($1.89 million). Even though the sale did not reach that amount, Daniel Monk, the man behind the creation of the bottle, was still happy with the final sale price.

“For me and the whole team, The Intrepid project has always been about more than money. This is a passion project to celebrate the life of my late father, Captain Stanley Monk who was himself an explorer and achieved many amazing things during his life.”

Coincidentally, the auction was held on what would have been Captain Monk’s 80th birthday. The sale, still record-breaking in terms of the scale of the star item, will provide money for the charity Marie Curie and Campaign Against Living Miserably.

While it remains unknown who the winning bidder is, hopefully, this is not the last we hear about the oversized scotch.

About the Marie Curie Charity

Marie Curie is a leading UK charity providing frontline nursing, hospice, support and information on all aspects of dying, death and bereavement. The charity offers vital support to patients and families at difficult times.