This Businessman Is Shipping An Entire Distillery To China 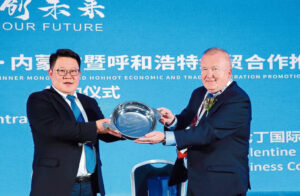 MengTai vice-chairman Ao Bo and Angus businessman Dave Valentine holding a quaich inscribed with the message Together, we will make the dream a reality. Image via The Courier.

A new whisky distillery will be traveling from Moray to China. According to The Courier, Inner Mongolia’s first whiskey distillery in Ordos is about 350 miles west of Beijing in China.

The Rothes-based fabrication group, Forsyths, has been awarded the contract to supply the stills and associated machinery. Owner Dave Valentine says, “The copper stills, which are still beaten by hand, along with all of the machinery required to make a premium whisky, will be constructed in modular form in Scotland. This has the benefit of allowing construction and testing in a controlled and safe environment before the system is disassembled, packed into containers, and shipped to Ordos.” 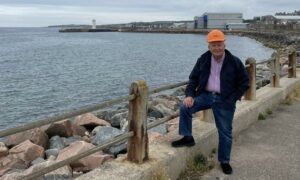 This system will allow for significant savings to the client, as it will reduce the time needed to assemble the distillery on location. It is planned the distillery will be producing spirits by next November. The export contract is described as being a “multi-million” pound deal.

However, this is “Plan B” thanks to the Covid-19. The construction, or reconstruction really, was set to be completed in 2020 but has now been pushed back due to logistical problems presented due to the pandemic.

Setting Up the Distillery

Now that the project is back on track, the equipment assembly will happen on-site with supervision from a team of five engineers from Forsyths.

Mr. Valentine says: “We contracted Forsyths of Rothes in Morayshire for the design & build of the distillery production equipment. It has built over 300 projects worldwide and is unrivaled in the manufacture of complete distillery systems.”

As stated in The Courier, Richard E Forsyth, managing director of Forsyths, says the firm looks forward to delivering the prestigious new distillery. Forsyth says: “It is the first project that our company has won in this province. We look forward to repaying that faith with a first-class distillery capable of producing high-quality premium malt whisky.”