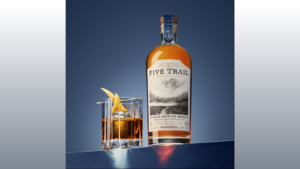 Panama and Canada residents can start to get excited because Five Trail, the award-winning whiskey from beer goliath Molson Coors, will start showing up on shelves this month.

“There is a huge level of interest for American whiskey in international markets right now,” David Coors, vice president of next-generation beverages for Molson Coors, said in a news release. “Exports of American whiskey increased 22% in the first seven months of 2021 versus the prior year.”

Canada and Panama are both in the top 20 importers of American whiskey, with Canada holding the No. 6 spot, according to Molson Coors. Five Trail is already available in 11 U.S. states, with that number continuing to grow.

“The story behind the brand is incredibly strong. The whiskey itself is fantastic. We have a strong belief it’s going to be a winner in this market. Given our success over the last 230 years, I think consumers will be excited to see us introduce something like Five Trail.”

As for Panama, Coors said that “There’s a great affinity for American brands [in Panama]. It’s a strong whiskey market as well. Our beer portfolio has resonated well with consumers there, and we’re hopeful the Five Trail whiskey brand does, as well.”